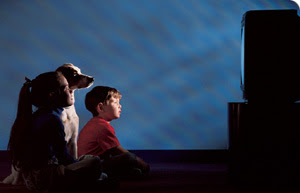 Well, it finally happened. My five-year-old son saw his first piece of propaganda from the homosexual community. It was a commercial on Nickelodeon with Wanda Sykes. She was telling some teenage boys not to use the word “gay” in a derogatory manner. On the surface, the commercial does have a very positive message. The campaign and the website are entitled ThinkB4YouSpeak.com. Who would disagree with that? Well, what about when the word “gay” meant something totally different and wasn’t offensive to anyone? I miss those days. A very important Christian lesson is being missed: God does not approve of homosexuality. Romans 1:26 & 27 says this clearly. God even destroyed a city because it was so wicked and practiced homosexuality. Not everyone thinks it’s OK.
This commercial only gives one side of the issue and millions of kids saw it. While they were obviously not told anything wrong per se, this situation does illustrate very plainly how groups can get a message into American homes and teach the next generation. If presented in the right context, almost anything can be communicated. For the uninformed viewer, the television never lies.
Watch what your kids are watching and make sure they learn your values, not someone else’s.