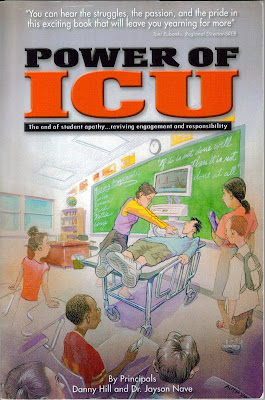 Our school faculty is currently reading The Power of ICU: The End of Student Apathy . . . Reviving Engagement & Responsibility by Danny Hill & Dr. Jayson Nave. ICU stands for Intensive Care Unit. Just like when someone is sick or injured and they need the ICU, some students need this level of help in regards to their schoolwork. Basically, the authors contend that schools should no longer give zeros. Ms. Kathy, my fourth grade teacher, would have a heart attack if she heard this, but as I read the book, it really started to make sense.

No one is really going to understand, “We’re not giving zeros this year.” That sounds like heresy. I don’t care who is saying it. The ICU model actually requires some explanation. I like what I’ve heard some teachers say. “We’re giving them ample time to complete their work.” This is what we’re really doing as it turns the focus on students doing every assignment rather than meeting deadlines. The authors repeatedly show how the zero-based system hinders students and “no zeros” is more like school used to be; truly “old school” when students weren’t promoted until they learned and mastered the material. Learning? At school? What a concept!!

“Well, we’re just enabling them to be lazy” is probably the primary argument against the “no zeros” (ICU) policy. Hill & Nave do an excellent job of showing how a zero-based system actually enables students in a different way. First, it enables them to fail. If they didn’t care enough to get it done in the first place, what is a zero going to matter to them? It’s easier to get the zero and then do nothing than it is to try and complete the work. Isn’t the latter what we want? We’re just playing into their hands by giving them a zero rather than giving them more time or more help, which is what a lot of them need anyway and which is what teachers should be about in the first place.

“College isn’t that way” is another protest. Well, not all students will go to college. Secondly, a major by-product of the ICU system is that students actually begin to care about their grades. WOW! If we can get them to care now, college will actually be an option for more of them. Let’s see a zero do that. Besides, I had plenty of college professors who were more than willing to give me extra time if I pleaded a reasonable case. This was even truer during my master’s degree. The teachers knew we cared about our grades and they were willing to bend on their deadlines in order to make sure we could get the material. Life happens.

I’m the first to question anything that is status quo. Giving zeros has been around for a while, but I was skeptical of questioning a grading system that rewards excellence and punishes laziness. Now, that’s my reality. The fear of failure has spurred me on in everything, but not everyone is like me.

In my opinion, student attitudes are on a continuum. On one end you have your group that wants to do well, and on the other end you have your group that absolutely refuses to do anything. Those in the middle can sway back and forth depending on their mood, the teachers, and what is going on in their lives. Some will do their work and others only need one little excuse to not do their work. They think you don’t like them, they didn’t feel like it, or they just had something else to do. All they need is one reaction from a teacher to seal the deal, and it’s usually this one, “You don’t have your work? OK, that’s a zero.” Hear me on this, THE STUDENT DOESN’T CARE. All that happens from these interactions is high blood pressure and nothing turned in. The ICU system takes care of this perpetual back and forth of a teacher screaming and a student tuning out because it takes away the student’s most powerful tools: time and apathy. Telling them they’ll never get a good job if they neglect the crossword puzzle will not motivate them. They’ll win every time if all they have to do is listen to you lecture for a bit.

The message that ICU really communicates is, “You might as well do your work; it just isn’t worth fighting anymore.” By staying on them to get the work done, you teach them that it is important, that you care and that you will not give up on them. Too many students need all of these messages, especially the second and third. Care enough about your students to give them more time and to help them learn. Changing your view on this is difficult, but it will instill “life-long learning,” and I bet that phrase is on almost every school mission statement across the nation.

ICU takes away the arguments of every apathetic student like, “I turned it in. I didn’t know about it. I didn’t understand.” Then, when a teacher begins to verbally bash him for not doing the assignment, guess what? He still hasn’t turned it in. With ICU, students can’t fight anymore. It’s what we’ve needed for a long time, but the shift was so extreme, we couldn’t see it.

Those adults who are resistant to the ICU system do not base their arguments on data. The only arguments that you can find are those I have mentioned and they are largely anecdotal. Hill & Nave describe the resistance phenomenon as a paradigm shift. In the book Sway: The Irresistible Pull of Irrational Behavior, Ori & Rom Braffman call it Value Attribution. When a certain value is placed on an idea, there’s little that can sway the person to think differently even if it means risking the lives of hundreds of people. Well, when we’re talking about education, we’re basically talking about influence that will continue throughout multiple generations. ICU is worth trying because it has solid examples on its side rather than an allegiance to an old idea.

ICU isn’t a new program; it’s much more than that. If you put a new paint job on an old car, without fixing other parts, it’s still an old car. The ICU program is a change in culture which is what really needs to happen in our targeted schools today. So, turn in your clunker and get a new culture. I have believed this for some time. No amount of guidance lessons or study skills classes can change the entire school. It has to be an entire brain transplant. ICU does just that.

Visit the web page to find out more.